This Page is currently under construction and will be changing frequently over the next few weeks:

Current map of Bedfordshire, UK: (Click on image to enlarge) 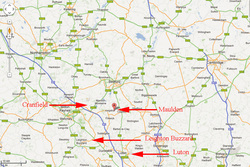 LDS shows a William Millard baptized January 25, 1565 at Westoning, Bedfordshire, which is twelve miles south of Cranfield.  His father is Edward Millward. LDS (ICI) shows the children listed below grouped in a single entry with their parents with the family name of Myllard, which may have been the original spelling.  William's children were born at Cranfield, Bedfordshire as follows: Nicolas Myllard, born October 4, 1601, Elizabeth Myllard, born about 1602, died October 11, 1602, Alice Millward, born April 22, 1604, William Millard, born January 25, 1606, John Millard, born March 3, 1610, and George Milward, born April 3, 1614.

William Millard's 1638 will is shown in an entry below.

However, England Births & Christenings records also show a William Myllward born in Maulden December 02, 1565, the son of William Myllward, which is 9 miles from Cranfield.

The above coincidences are further circumstantial evidence of a close family connection between Richard and William, perhaps even first cousins.

Birth records for William senior is not shown, a probable cause would be if they had immigrated from France to escape the Huguenot purges.  See below for birth records of both Richard and (possibly) William. 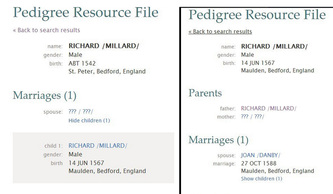 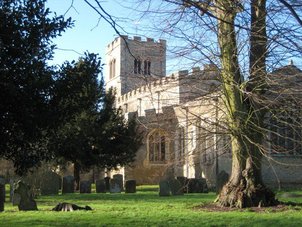 Church of St Peter & St Paul, Cranfield, Bedfordshire is most likely the church that William Millard of Cranfield, born about 1565, attended. This was likely the only church in Cranfield at the time and he was likely buried here in 1638.

A history site for Cranfield notes '1568: A number of refugees from Flanders settled in the village bringing the techniques of lace making with them'. These are most likely the Huguenots. Following this logic, if William and/or his father arrived as Huguenot refugees, William was born in Flanders or within a few years of his father's arrival in Cranfield.

The church has many fine features. Built from coarse limestone, in the Early English and Perpendicular styles the church consists of a chancel, nave, vestry with chamber.  The Parish Church is dedicated to St Peter and St Paul. It is probable that the site of the Church and Churchyard was a meeting-place of the people before Christianity was known in this country. The first church would no doubt be a wooden building, as was usual in Saxon times. Earlier mention of the Church in Ramsey Abbey books was in the time of Abbot Walter, 1133-60, when he granted it to Godfrey, the priest, who paid 20s. yearly for the repair of the Service Books at Ramsey.

A stone building was erected towards the end of the 12th century and at the beginning of the 13th century. The north doorway, which is now blocked up, is of the Transitional-style of architecture, and is of about the date 1180.

1638 Last WIll & Testament of William Millard: (Click on image to enlarge) 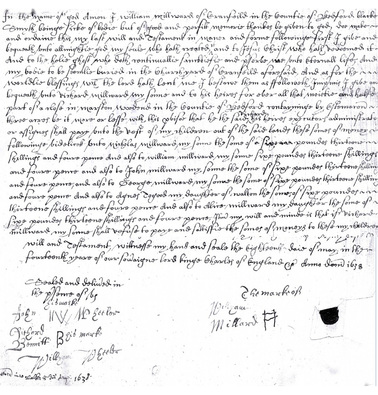 In the name of God, Amen, I, William Millward of Cranfield in the County of Bedford, blacksmith, being sick of body but of good and perfect memory, thanks be given to God, do make and ordain this my last will and testament in manner and form following.

First, I give and bequeath unto Almighty God my soul who hath created it and to Jesus Christ who hath redeemed it and to the Holy Ghost who hath sanctified me unto eternal life and my body to be buried in the Churchyard of Cranfield aforesaid.

As for the material blessings the Lord hath bestowed on me, I bequeath them as follows: 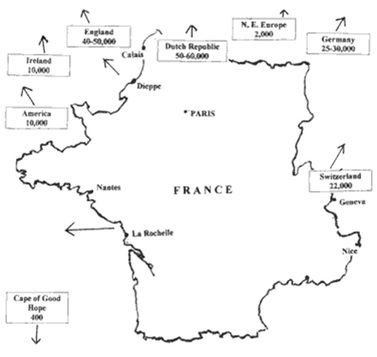 The name Huguenot was given to French Protestants who were influenced by Martin Luther's preaching early in the 16th century, and who later established a reformed church following the teachings of John Calvin.  By the middle of the 16th century, there were about 2,000 congregations and perhaps 1.5 million believers.  As the French Protestant church grew it came into increasing conflict  The continuing effort by the Roman Catholic Church and the French monarchy to eliminate rather than tolerate these Protestants resulted in a century of bitter persecution and fighting.

These French Protestants generally followed the teachings of John Calvin, a French theologian who preached in Geneva from 1537 to 1564.  The Reformed Church was established in France by the mid-1530s.  The new religion rejected the excesses and doctrines of the Roman Catholic Church and the French monarchy.   From the 1530s to 1560, the French Reformed Church experienced rapid growth, particularly among the nobility.  By the 1560s, the Huguenots had their own churches, schools, garrisoned towns, manned castles and fortifications.  But as the Protestant Church grew, conflict with the Roman Catholic Church and the Crown intensified.  As early as the 1530s, the first religious refugees began to leave France.

In 1561 Catherine de Medici, as Regent to her minor son Charles IX, granted certain privileges to the Protestants, but the peace was short-lived.  In March of the following year a group led by François, Duc de Guise, a staunch Catholic, attacked a congregation of unarmed Huguenots who were worshipping in a barn at Vassy, killing over one hundred people. This began the Wars of Religion, which tore France apart for thirty-five years

Huguenot numbers grew rapidly between 1555 and 1562, chiefly amongst the nobles and  city-dwellers. During this time, their opponents first dubbed the Protestants Huguenots; but they called themselves reformés, "Reformed'.  By 1562, they had a total membership estimated at least a million strong, especially numerous in the southern and central parts of the country.  In what became known as the St. Bartholomew's Day Massacre of 24 August – 17 September 1572,  Catholics killed many Huguenots in Paris; similar massacres took place in other towns in the weeks following, with an estimated total death toll of 70,000.


Economic history records indicate the loss of much of the French middle class caused a countrywide economic depression that lasted for over 100 years.

The map and description is from huguenotsociety.org.uk/history/

There is a framed list of Huguenot family names on the wall of this chapel.  One of the surnames  that appears on this list is "Maillard".  (source: Henry George Taylor Chan)

French Protestant refugees settled in the city during the sixteenth century: here they introduced silk-making.  (source: wikipedia.com)   This dovetails with the information regarding the establishment of silk-making in Shoreditch, which is close to Finsbury, England.  The family may have emigrated to the Canterbury region and then on to Finsbury.

Huguenot Chapel, Canterbury Cathedral - This Chapel is only open at 3.00 pm on Sundays, when worship is conducted according to the French Protestant tradition. The Huguenots were among the refugees who fled from religious persecution in the 16th and early 17th centuries. They were given hospitality in the Crypt which they originally occupied entirely. Now they worship in this Chapel, once the Black Prince's Chantry.