Updated Ancestry for John and Thomas Millard;
​Patriarchs of the Massachusetts Millard

1) What we have learned; The English Origins of Thomas Millard of Boston and his cousin, John Millard of Rehoboth - by Trudy Millard Krause
Click on image to enlarge: 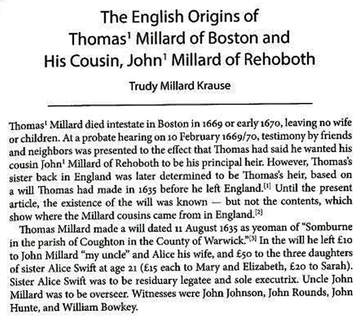 2) What we don’t know;
- by Trudy Millard Krause
​Click on image to enlarge:

3) Let’s learn about Coughton, Warwickshire
​Coughton is a small village located between Studley 2.4 miles (4 km) to the North and Alcester, 2 miles (3 km) to the South, in the county of Warwickshire, England. The village lies 19.3 miles (31 km) from Birmingham on the Birmingham–Alcester A435 road, which here follows the line of the ancient Roman Icknield Way.
​​Click on image to enlarge: 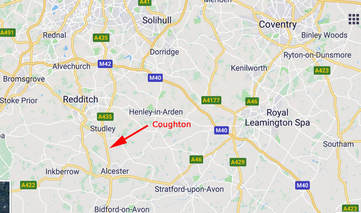 Coughton was first named in the Domesday Book commissioned by William the Conqueror in the 11th century and is steeped in English history.
​The village mainly consists of a number of houses on Sambourne Lane, Coughton Lane and farms and is primarily noted as being the location of the National Trust property, Coughton Court, which lies 400 yards to the east of the A435. The population according to the 2001 census was 139, increasing to 157 in the 2011 census.
​Click on image to enlarge: 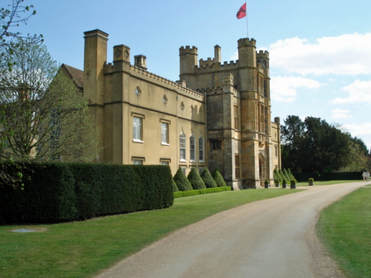 The staunchly Catholic church of St Peter was built upon previous structure(s) in the late 15th and early 16th century, reputedly by Sir Robert Throckmorton. The Throckmorton family were heavily involved in the failed Gunpowder Plot of 1605, when Catholic plotters attempted to assassinate the Protestant King James I by blowing up Parliament, is one of the most notorious moments in English history. ​
​​Click on image(s) to enlarge: 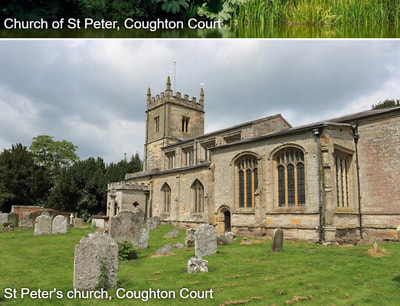 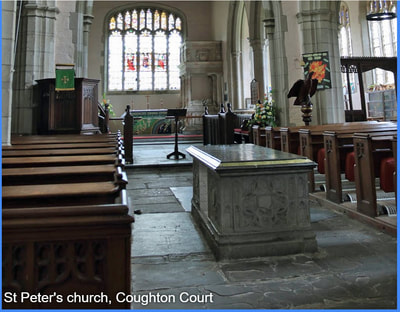 Note: The Gunpowder Plot of 1605 was a Warwickshire conspiracy. The conspirators' principal aim was to kill King James, however another important objective was the kidnapping of the King's daughter, third in the line of succession, Princess Elizabeth. Housed at Coombe Abbey near Coventry, the Princess lived only ten miles north of Warwick, convenient for the plotters, most of whom lived in the Midlands. Once the King and his Parliament were dead, the plotters intended to install Elizabeth on the English throne as a titular Queen.
Although the plot failed and most conspirators were executed, it was soon followed by the 17th Century Civil War.
By 1600 a number of villagers and nearby residents had become recusants (refusing membership in the church) due to new beliefs, mainly the so-called Puritan Classical Movement of 1580-1590, which was an administrative form of presbyterianism organised in secret within the Church of England. In fact, some members of the Throckmorton family had become Puritan supporters.
​The above history may help explain some of the reasons for leaving Warwickshire and seeking religious freedom in the America.
4) Let’s learn about the Coughton Millards;

b)  Recusants (those bypassing the church) may have been recorded in family Bibles or Puritan records but none are available today.

c)  What are available are some scattered bits of Coughton Manor records as well as Thomas Millard's last Will;  the Probate record indicates he had no wife or living children at the time of his death, which gives us something else to research as Geni profiles indicate he had 2 living sons in 1669, Thomas II and Henry Millard. 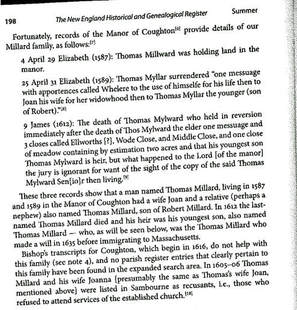 A five (5) generation descendants fan chart for the Massachusetts Millards is seen below.
​Click on image to enlarge: 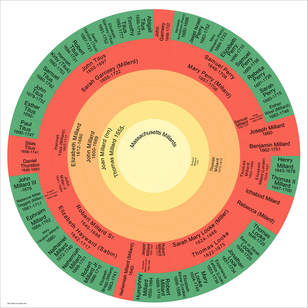